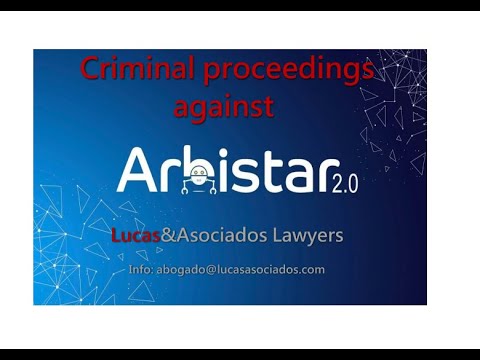 Lucas&Associates Lawyers has launched the Platform for People Affected by Arbistar to file a complaint with the Courts of Tenerife, for crimes of misappropriation and pyramid fraud, as well as to represent before the National Court in Madrid all those affected.

The facts are very serious, thousands of affected have lost their Bitcoin and sowe have made it reach the press. It is necessary to unite the maximum amount of people affected.

We represent both those affected in Spain and non-residents in Spain.

Urgent action must be taken to request precautionary measures that pressure at the same time that they protect against a leakage of deposits or flight from justice. We are going to put pressure on the Arbistar Company, administrators and collaborators to negotiate, as well as we will request the seizure of all property and custody.

We strongly recommend not signing any kind of agreement with the company without prior advice, as they are trying to avoid criminal liability, as well as buy time.

In our team there are lawyers, bankruptcy specialists and economists who will closely review the assets of the company in the interest of those affected. We will also promote expert opinions to know if the Bot really worked or if it worked in pyramidal shape.

Those who wish to join the platform must sign the contract for representation, providing screenshots of the amounts together with the accreditation of their identification document. To expedite the procedures there is a form at your provision.

We remain at your disposal for any clarification.